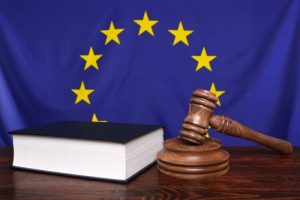 On Monday, 8 June 2020, Centre for Democracy Miko Tripalo, in cooperation with Friedrich Ebert Stiftung in Zagreb, organized an online guest lecture and accompanying online discussion entitled Judiciary and Rule of Law – the Croatian Way. This event was organized as part of Centre Miko Tripalo’s Jean Monnet Project European Values ​ in a New Member State: Five Years of Croatian Membership in the EU. The lecture was conducted by Ivo Josipović, member of Centre Miko Tripalo and of the project team, professor at the Faculty of Law of the University of Zagreb and former President of the Republic of Croatia (from 2010 until 2015). This was the final project activity planned in the Jean Monnet project work plan, and, as the previous two guest lectures, was organized according to the epidemiological measures prescribed under Covid-19 lockdown in Croatia prohibiting in-person events. The event was moderated by journalist Ana Raić Knežević from Telegram online news site and was attended by over 30 participants.

The relevance of the topic of equality before the law, rule of law and the judiciary in the current situation in Croatia, and its importance in the context of the preservation of European values in a new member state (as outlined in the Jean Monnet project’s work plan) generated far-reaching interest in this lecture and discussion and attracted a much broader audience than it would have had it been held in a traditional university setting. The lecture began with the short introduction by journalist Raić Knežević who encouraged Josipović to focus on several key questions. Do we need to reform the judiciary in Croatia? What is behind the low levels of public trust in the justice system? What is the situation with the selection of judges in Croatia?

Josipović began with an acknowledgement of all the moral and hard-working judges in Croatia but continued by saying that the judiciary in Croatia does not adequately fulfil its functions. He brought up the question of the need for reform and asked if now was the right time to undertake judicial system reform in Croatia. He immediately recognized that many will say that it is never the right time to initiate justice reform because of its complexity but for him, the choice is between changing the system or continuing to regress. Josipović went on to explain that many of the positive changes and reforms undertaken during the accession process were effectively reversed or ignored once Croatia entered the EU resulting in some of the main problems with the judicial system currently and over the years: politically- motivated election of judges, a caseload of over a million unresolved cases, cases older than the work lives of some judges and the public perception that the justice system is not functional.

Josipović stated that the judiciary has removed itself from the separation of powers meaning there is no mechanism for oversight of the judiciary in Croatia. The DSV (State Judiciary Council) elects, evaluates and controls the judges and is in its essence a self-regulating mechanism, as demonstrated by the small number of disciplinary procedures. In recent years, there has also been much resistance from the judiciary in response to the law professors’ attempts to point to some of the shortcomings in the functioning of the system. Josipović noted that the judges are untouchable and many display a disinclination to discuss the fundamental questions regarding the judiciary. Part of the problem with the judiciary are inadequate laws that need to be rewritten, as should the procedures for electing judges. This is precisely one of the biggest problems with the judiciary according to Josipović. The functioning of the DSV should be reformed and the main criteria for change should be expertise of the judges. There need to be regular systems of expert education for all judges and the DSV should be the oversight mechanism for this. Many of the cases and decisions are not clearly explained and the legal arguments are lacking. Fundamentally, Josipović believes that the legitimacy of judges should stem from expertise and morality, but that today judges are accountable only to themselves, they elect and dismiss themselves

Josipović then spoke about the cases of judicial involvement in writing some laws and the lack of the separation of powers evident in these instances. He mentioned the general dissatisfaction with the work of the judiciary, as well as the official reprimands by the State Attorney and the decisions by the European Court for Human Rights. Despite these official reactions and the general public’s sense of the dysfunctionality of the judicial system, meaningful change seems to be lacking. Josipović also mentioned the problem of the State Attorney’s Office and the different opaque political influences on this independent body. He reiterated that the public perception is that court cases and trials take too long and benefit a select few people.

He then asked the question: why do judgements last so long if there are large numbers of judges in Croatia? He continued to try and answer the question by citing a few main reasons: statute of limitations, dragging-out the cases with high political exposure and significant material benefits for the state, questions of professional ethics, selective approach to cases by some judges. All these reasons contribute to the general sense that justice for ordinary Croatians is often out of reach. Josipović also mentioned the reactions of some judges to criticisms in the media by journalists and the lawsuits that these judges initiated against the critical journalists (libel lawsuits). These lawsuits contributed to the fear of criticizing judges in Croatian society and their lack of self-reflection. In Josipović’s opinion, the Croatian judiciary is extremely closed, which leads to their refusal to introduce new ideas and knowledge into the judicial system, and that, due to constant criticism, the judiciary has forgone transparency and is not ready to publically defend its work.

In conclusion, Josipović reiterated the idea that there has been a regression of the value of rule of law since Croatia joined the EU in 2013, however this regression cannot only be tied to the ending of the conditionality principle. The roots of this regression are deeper and reach farther into the past to the post-1990 changes brought about by transition and the formation of the Croatian state. He summarized once again the key aspects of social regression in terms of the rule of law and by extension the structure and functioning of the judiciary: independence of the judiciary, its functionality, the relationship of the judiciary to other branches of government and the social responsibility of the judiciary and its employees to achieve the social function that the judiciary needs to have in modern society. Josipović noted several reforms that would improve the legal system: better organization of the judicial system, more efficient case management and targeted changes of procedure legislation which served as a prompt for the lively discussion that followed the lecture.