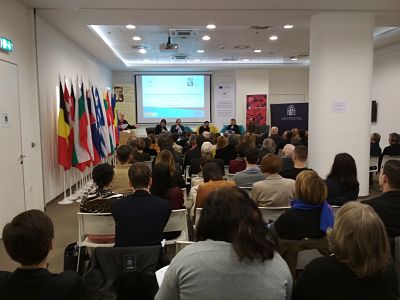 Centre for Democracy and Law organized an international conference European Values, Member States, and the Future of the EU that was held on 5 and 6 December 2019, at the House of Europe in Zagreb. The conference is part of the Jean Monnet project European Values in a New Member State: Croatia in the First Five Years of EU Membership. The first day of the conference brought together leading experts on the topics of the values of freedom and solidarity in the Croatian and the European contexts, representatives of civil society organizations, unions, media, public officials and scientists who explore these values in an interdisciplinary way.

Dario Čepo from the Faculty of Law at the University of Zagreb and the Academic Coordinator of the Jean Monnet project and Tvrtko Jakovina, President of the Management Board of Centre for Miko Tripalo gave the welcome remarks. Duško Sekulić from the Faculty of Law at the University of Zagreb was the key note speaker. Dario Čepo presented the project, its objectives and he emphasized the importance of examining the role of European values in the European Union member states. Tvrtko Jakovina noted that a number of topics including the European Union and the Croatian position in the international community, are in the focus of Centre Miko Tripalo’s work. Many of the Centre’s activities have a European dimension and examine how Croatia can contribute to the European Union as a common project. Duško Sekulić gave the keynote speech on the topic of Values in Europe – Modernization, Conflict, and Change. He believes that we should not be surprised by the strengthening of authoritarian tendencies as a possible solution to social problems, and we also should not be surprised by the rising opposition to liberal ideas such as the market economy. Authoritarianism, according to Sekulić, is not a fixed feature of social and political systems; it occurs under certain circumstances. He considers sovereignty to be the new word for nationalism. Underlining the nation in such way can lead to numerous questionable outcomes, such as jeopardizing minority rights. In his concluding remarks, he paraphrased Jean Monnet by saying: „if I were to begin building the European House once again, I would start with culture, not the economy“.

The Value of Freedom Among Croatian Youth
Kosta Bovan, Faculty of Political Science, University of Zagreb

Solidarity in EU Law: The Story of Perseverance and Functionality
Adrijana Martinović, Faculty of Law, University of Rijeka

Solidarity as a Societal Value – the Role of Unions
Ana Miličević Pezelj, Union of Autonomous Trade Unions of Croatia

PANEL 3: JUSTICE AND THE RULE OF LAW
Justice as a Key Component of the Rule of Law: the State of Play in Europe
Susana Sanz Caballero, University CEU Cardenal Herrera, Valencia, Spain

Rule of Law – What do Independent Institutions for Human Rights Protection Got to do With It?
Lora Vidović, Ombudswoman of the Republic of Croatia

The European Union’s Existential Challenge: The Principle of Judicial Independence and Effective Protection of Fundamental Rights
Goran Selanec, Constitutional Court of the Republic of Croatia

Rule of Law in the Time of Populism
Josip Kregar, Faculty of Law, University of Zagreb and Centre Miko Tripalo

Public Participation – Principle of the European Administrative Space and its Implementation in Croatia
Petra Đurman, Faculty of Law, University of Zagreb

You can find the conference report for both days attached: