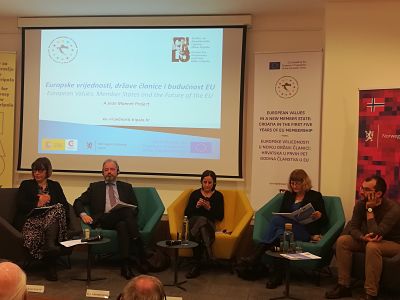 Summary of presentations given during the panel on freedom.

The introductory lecture on the panel on freedom was given by Simona Guerra from the University of Leicester. She said that the process of democratization is in retreat not only in Europe, but in the global context. Guerra showed that those countries that have democratized after the Cold War are today declining in terms of democratic standards. She cited Poland and Hungary as the main recipients and beneficiaries of EU funds, but noted that they are lagging behind when their adherence to European values are considered. Meanwhile, according to statistical data, there has been a drastic number of reports of Hungarian citizens appealing to the European Court of Human Rights (up from 0,71% to 10,41%).

The second speaker was H. E. Mr. Haakon Blankenborg, Ambassador of the Kingdom of Norway to the Republic of Croatia. He argued that the values that we speak of today within the European Union are under threat. He mentioned three speeches that clearly outlined the direction of the debate on values in the EU: the one by Jacques Delors about strengthening cooperation and institutions of the EU; the one by Margaret Thatcher about the importance of national (state) sovereignty; and the one given by Viktor Orban in 2014 about illiberal democracy. Blankenborg considers that we are witnessing a rising polarization in Europe and that the main question remains: Who will decide when my freedom is violated?

The next presentation was given by Zrinjka Peruško from the Faculty of Political Science in Zagreb and Centre Miko Tripalo. Peruško claims that the violation of media freedoms began with Viktor Orban. The question remains how can these changes in values be explained. According to Peruško, there is no longer a belief in the linear progress of values. In Eastern Europe we are prisoners when it comes to media censorship of topics and actors. She named three examples of media freedom violations: everyday pressures on the freedom of expression, freedom violations in the digital media, and cultural pressures (for example: billboards for the Fine Dead Girls theatre show being censored). Instead of media freedom we are witnesses to the constant pressures that journalists are exposed to.

Ivana Dragičević from the Information platform N1 spoke about the understanding of freedom in today’s world and the challenges facing liberal democracies. Societies have underestimated the business models of tech giants which resulted in people donating their personal information that has in turn become part of artificial intelligence and big data processes and is used to profile voters and consumers. The understanding of freedom in an age of the onslaught of radical options, whether religious or political, and the impact of the digital space and manipulation, must be redefined. The role of education is of particular importance since it does follow the same speed as the development of technology and the possibilities for manipulation. Her conclusion is that the space of freedom must be conquered continuously. She compared every individual in society with Sisyphus, who will always have to push the rock uphill in his life, no matter how many times it rolls back downhill.

Kosta Bovan from the Faculty of Political Science in Zagreb gave a presentation on youth and freedom. He asked whether we consider young people to be leaders of social change or a vulnerable group within society. The way in which young people value freedom can be an indication of socio-political developments in society. He referred to the recently conducted research which showed that 50% of young people believe that we need a strong leader, while 20% believe that dictatorship can sometimes be a better form of government. At the same time, the survey showed that 21% would justify restrictions on human rights in the case when the interests of the nation are endangered. The paradox is that young people who prefer more freedom are using Internet less for getting information, they are less interested in participation and they have less trust in political institutions. The ones who prefer less freedom are more active and have less traditional values.