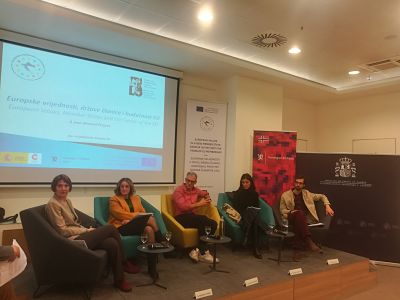 Summary of presentations given during the panel on solidarity.

The second panel on solidarity was opened by Andrea Sangiovanni from the European University Institute. He showed that there is an increase in the levels of inequality in Europe. As desirable models that would reduce inequality, Sangiovanni mentioned applying risk-sharing measures in the Eurozone, expansion of structural and cohesion funds, and sharing burdens of refugee integration. He named the single market efficiency, lower transaction costs and free movement as potential benefits of further integration. As the costs of integration he mentioned the increase of inter-regional inequality and higher pressure on lowest earners in host countries.

Ivan Blažević from Foundation SOLIDARNA spoke about philanthropy stating that philanthropy has a deeper reach into the system than a state has. He presented the data according to which women are much more inclined to donate and their donations are directed towards more important cases. Philanthropy is most developed in Germany in contrast to other EU member states. Blažević believes that philanthropic sector should develop more in line with the bottom-up approach, from the national to the European level. In Croatia, donations are directed towards marginalized groups in society.

Ana Miličević Pezelj from the Union of Autonomous Trade Unions of Croatia claims that the welfare state should be revitalized. When the market system was developing, at first these changes were described as the social market economy, but in Croatia we have lost the social part of this phrase. The economic crisis has undermined the system of values and made the rich even richer. Miličević Pezelj underlined that nobody talks of labor as a value and, therefore, she urges the unions to fight for the rights of most vulnerable citizens.

Valerija Botrić from The Institute of Economics in Zagreb was the last speaker. She stated the four criteria for a successful currency union: labor mobility, capital mobility, a risk sharing system, and establishment of equal business cycles. Statistics have shown that there has been no increase of solidarity among EU member states. On the contrary, the differences between them are increasing. Botrić claims that the differences are not only present between EU member states, but that our societies within the Union are quite heterogeneous. When it comes to inequalities in Southern Europe, the differences were present from the early 1980s, but in Eastern Europe the inequalities began to increase in the 1990s and they are still present. Economic policy measures must be adopted in the short term, but we still do not know whether they will work in the long term.