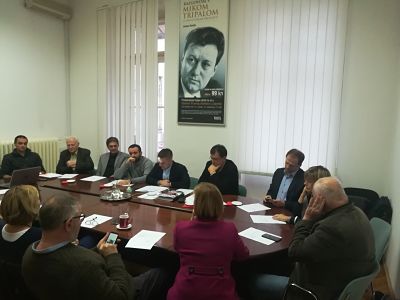 On Thursday, December 20, 2018 in Centre Miko Tripalo’s conference room, Members of the Project Team participated in a Kick-off Meeting of the Centre’s Jean Monnet project European Values in a New Member State: Croatia in the First Five Years of EU Membership.

In the process of developing the Jean Monnet project proposal, we harnesed the synergy of the interdisciplinary expertise of our members, weaving their knowledge and experience into a coherent narrative, while utilizing the strengths of the Center and its members in the best possible manner.

The goal of the project is to encourage public dialogue about and understanding of European values ​​in Croatian society and to examine the impact of these values ​​on certain segments of public life in Croatia (populism, Euroscepticism, role of the media, local democracy, judicial reform, minority rights, access to justice and the rule of law in the transitional economy).

13.30 Discussion
European Values in Croatian Society by Selected Segments
Members of the Project Team and other meeting participants

We plan to accomplish these goals through the following project activities: two roundtables (one on citizens’ rights and challenges of democracy in Croatia, the other on justice, equality and diversity in Croatia), an international conference on the topic of European values, democracy and the role of Croatia in the future of the EU, as well as a series of four guest lectures for students at various universities. A publication on European values ​​in Croatia is also planned as part of the project to be accompanied by appropriate digital content.

The first Roundtable, Citizen’s Rights and Challenges to Democracy in Croatia will be held on March 21, 2019. Topics and Speakers are following:

The second Roundtable, Justice, Equality and Diversity in Croatia, will take place on May 13, 2019. Topics and Speakers are:

International Conference, European Values, Democracy, and Positioning of Croatia in the Future of the EU will be held in November 2019 and the Speakers will debate on following topics:

EU Fundamental Values and Populism,
Role of Media in Preserving European Values,
Minority Rights and Values in the EU,
Justice for All as a European Value