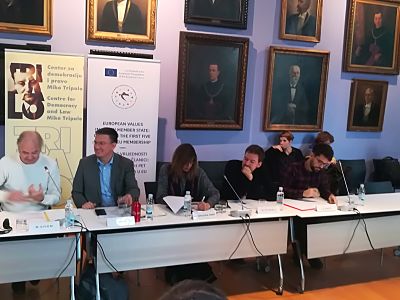 Summary of presentations given during the panel on participation.

Karlo Kralj from the Scuola Normale Superiore in Italy and the Faculty of Political Science in Zagreb spoke about the Disobedient Democracy project, which included four case studies of research into protest behavior in Spain, Portugal, Croatia and Serbia. The project detected and coded protests covered in daily newspaper from each of the countries listed. The results showed that in Spain and Portugal mobilization was co-organized by trade unions and new actors in the public space, while in Croatia and Serbia the role of trade unions was much smaller.

The next speaker was Caroline Hornstein Tomić from Ivo Pilar Institute of Social Sciences. She believes that participation depends on a number of factors such as the place that the individual occupies in society, level of property ownership, place of residence. Knowledge and motivation should be the main incentives for participation, and it is often in the family where one learns the importance of politics and participation. Civic education should especially serve those who have not received it through the family or elsewhere and it should start at an early age. It is necessary to develop empathy and a sense of solidarity, and not to impose on young people the teachers’ own views or political thinking. This would contextualize civic education into society. Young people raise their voice through mobility and the programs that they participate in, not necessarily by voting.

The last speaker was Nikola Puharić from the Youth Initiative for Human Rights. He began his presentation by stating that the European Union was founded on the ideas of peace and reconciliation. Today, there is a verbal conflict in society if we look more closely at the discourse of politicians, and this conflict is imposed on young generations. Puharić believes that today we do not have a critical view of what was happening in the past. For this reason, Youth Initiative for Human Rights launched youth exchange programs in the region to provide them with a platform for learning and participation. Young people today are afraid of participating in discussions about the past, but he notes that we are all responsible for the way we speak about the past. It is important that there are mechanisms for youth participation in all these social processes.